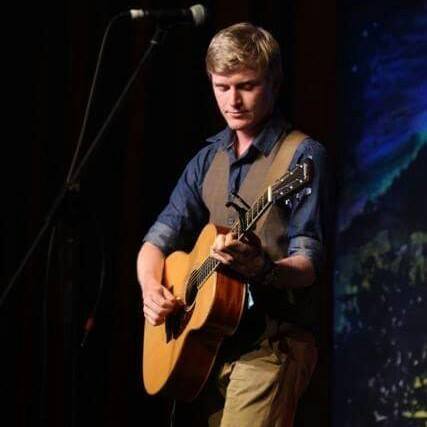 Matthew Dames is a seasoned performer who migrated to Tasmania, Australia from Cambridge, UK. He busks frequently at Salamanca Market and Farm Gate Market in Hobart. His Contemporary Folk style is warm and sensitive, drawing influence from artists including Passenger, Luka Bloom and Dougie Maclean. Matthew has released two original albums and his third album, Traditional Ballads, is a selection of his most requested traditional folk songs. Matthew has performed at multiple national and international music festivals including the Edinburgh Fringe Festival.

Matthew was the winner of the 2015 Liz Johnston Memorial Award for Vocal Excellence at the National Folk Festival. He also won the Tamar Valley Folk Festival Youth Award with his song Climbing Mountains in 2012.

Matthew is the lead Singer and Rhythm Guitarist for the band Schmeltic and a member of the A cappella folk trio Velvet Sledgehammer.

“Matthew draws on old and contemporary folk music that I don’t see much around the Australian scene, and he really nails it live.”

“Dames’ handcrafted songs take you on a journey with their blend of pensive lyrics and intricate guitar work.”